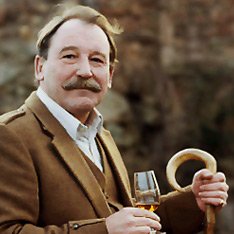 Charles MacLean is a writer whose special subject is Scotch whisky, about which he has published ten books to date, including the standard work on whisky brands, Scotch Whisky and the leading book on its subject, Malt Whisky, both of which were short-listed for Glenfiddich Awards.

Whisky: A Liquid History, published by Cassell in 2003 was named Wine and Spirit Book of the Year (2005) by the James Beard Foundation of New York. MacLean’s Whisky Miscellany followed in 2004, expanded in 2006 as Whisky Tales; in 2008 he was Managing Editor of Dorling Kindersley’s Eyewitness Companion to Whisky, and in 2009 their World Whiskies.Whiskypedia was published in June 2009.

He was trained in ‘the sensory evaluation of potable spirits’ by the Scotch Whisky Research Institute in 1992 and has presented numerous tastings and talks in the U.K. and abroad for whisky companies, corporations, universities and clubs, and on radio and TV. He is a member of the Judging Panel (Spirits) of the International Wines & Spirits Competition, and was runner-up as ‘Communicator of the Year’ in the 2003 IWSC Awards.

He acts as a consultant to the whisky industry on a variety of matters, and over the past 20 years has written promotional materials for all the leading companies and brands. He is also Whisky Consultant to Bonhams Auctioneers.

He was elected a Keeper of the Quaich  in 1992 for ‘his services to Scotch over many years’ and granted the rare honour of being elected Master of the Quaich, the industry’s highest accolade, in October 2009.

He holds degrees in Art History (St Andrews) and Law (Dundee), is a Writer to Her Majesty’s Signet, a Fellow of the Society of Antiquaries of Scotland, a Visiting Lecturer to the Smithsonian Institution, Washington, an Honorary Fellow of Massey College, University of Toronto and of Champlain College, University of Trent, a Councillor of the Clan Maclean and a member of the Society of Authors.